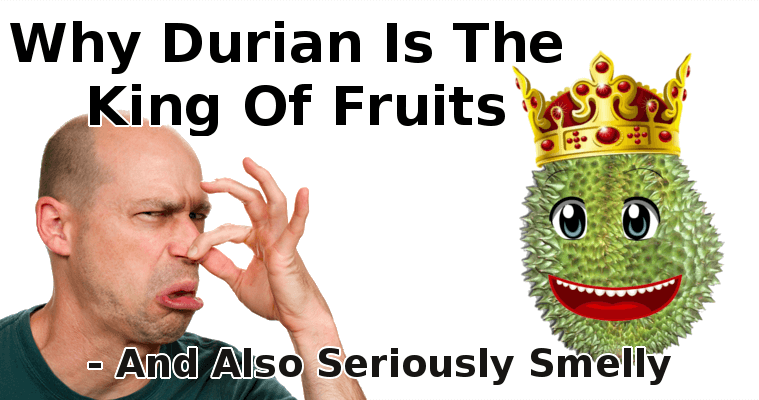 Durian fruit, nicknamed “the king of fruits” in Southeast Asia, is very nutritious. More so than many other fruits. It’s just a shame it has such a bad reputation due to its extraordinary strong smell. Due to this bad smell, the fruit has even been banned from the Singapore Rapid Mass Transit and hotels.

Why Does It Smell So Bad?

A group of scientists from the German Research Centre for Food Chemistry[1] has conducted a study to try and figure out why this fruit produces such a strong awful smell. They used a Thai durian and found that the smell is not from just a single compound. It’s due to a mixture of 19 different chemicals.

However, none of the compounds match the smell of the durian directly. They all have a wide range of smells, but it’s when mixed together that they produce that awful distinctive smell of the fruit. But it was two in particular that really conjured up that rotten smell — ethyl (2S)-2-methylbutanoate which has fruity components and 1-(ethylsulfanyl)ethanethiol which is more onion based.

How Is Durian Eaten?

The durian fruit is used in both savory and sweet dishes. It has a creamy flesh and seeds which can also be eaten. Some have likened the taste to a weird mix of cheese, almonds, garlic, and caramel.

People have used durian fruit for juices, roasting or boiling, in soups or as a vegetable side dish. It’s even used for ice creams and desserts. It’s a very versatile fruit!

Interestingly the name of the durian fruit actually dervices from a Malay-Indonesian word for ‘spike’. The word ‘duri’ refers to the spiky outer shell of the fruit.

Love It Or Hate – It Is An Interesting Fruit!

The durian is a fruit which you either love or hate. Yes there is a very powerful awful smell from this fruit, which has been likened to “turpentine and onions garnished with a gym sock”. The taste, however, is very different from the smell.

Some people state it tastes like “sugar cream or creme brulee but with more personality”. So if you can get past the smell then you will probably enjoy this fruit which also has many potential health benefits. It is worth giving it a try if you get the chance – even if only once!

If you do decide to give this fruit a go then try mixing the flesh with a little sugar and wrap it in a pancake. You could also try it wrapped in rice paper and deep fried. It is a strange fruit indeed, but life is all the richer for having the durian in it.